In a rare and unexpected treat, fundamental riot grrrl band Bikini Kill comes to Hollywood Palladium on Friday 26th April 2019 for the second night in a row, in a very limited run of reunion shows! The band (Kathleen Hanna on vocals, Tobi Vail on drums, and Kathi Wilcox on bass – along with guitarist Erica Dawn Lyle) are reissuing their 1991 demo tape Revolution Girl Style Now!, featuring three previously unreleased tracks, and are taking to the stage to bring their sound to a new generation:

"We’re trying to catalog our work, and from an archivist, historical perspective we thought we needed to [make] this music available for people. I certainly didn’t have any idea back then that we would still be talking about this now." – bassist Kathi Wilcox 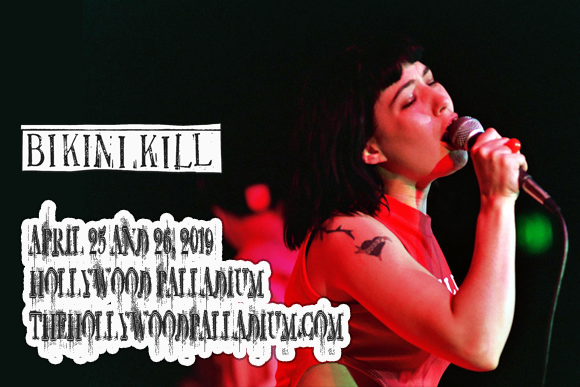 Formed in Olympia, Washington, in October 1990 by singer and songwriter Kathleen Hanna, guitarist Billy Karren, bassist Kathi Wilcox, and drummer Tobi Vail, Bikini Kill is an American punk rock band and pioneer of the riot grrrl movement. Known for its radical feminist lyrics, aggressive sound and raucous, female-centric shows that encouraged female audience members to come to the front of the stage, the group became the focus of a lot of media attention throughout the 1990s and became an icon of feminism to many. The band met while attending The Evergreen State College in Washington and many of its first shows were accompanied by a fanzine called Bikini Kill. The group released its independent demo cassette, Revolution Girl Style Now!, in 1991, followed by the Bikini Kill EP (produced by Ian MacKaye of Minor Threat and Fugazi) on  the indie label Kill Rock Stars in 1992. They followed with a split album with English riot grrrl group Huggy Bear in 1993 (Our Troubled Youth/Yeah Yeah Yeah Yeah), followed by two more studio albums: Pussy Whipped (1993) and Reject All American (1996). The group disbanded in 1997, but announced a limited run of reunion shows in 2019.