Party with the power of three! DJ trio Cash Cash & R3hab have joined forces and are embarking on a co-headliner tour across America. And they're pulling all the stops to let the beat drop at the Hollywood Palladium on Friday 15th November 2019. Cash Cash would surely dish out its platinum hits “Take Me Home” ft. Bebe Rexha (which amassed over 1 million track equivalents), “Millionaire” ft. Nelly, “Matches” ft. ROZES, “All My Love” ft. Conor Maynard, “Finest Hour” ft. ABIR. While DJ and producer R3HAB is definitely set to deliver his boldest, brightest, and biggest hit to date, “Around The World (La La La)” . Expose your ears to the music of EDM's boldest innovators. Start clicking that 'buy tickets' button to secure your space on the floor where the beat would drop and explode! 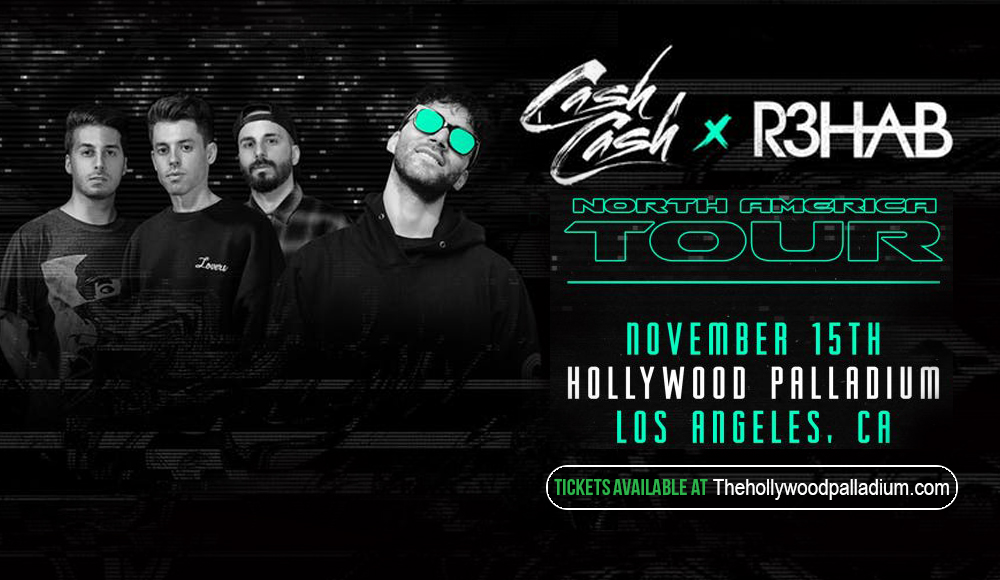 Cash Cash are a DJ trio are the go-to DJs and instrumentalists of superstars. Their resume boasts of official chart-topping remixes for superstars such as Katy Perry, Bruno Mars, Britney Spears, Kelly Clarkson, Krewella, David Guetta & Hardwell. The group's highest-charting album has spawned the single "Take Me Home," which featured Bebe Rexha. The song was certified platinum by the RIAA and ARIA and also received certification in the UK and Canada. They have taken their sounds on the road that lead to the hippest dance clubs and the hottest dance festivals such as YOURSUMMER Music Festival 2019 in Korea and KAABOO Music Festival.

Billboard Magazine and Forbes hail him as the future of club music. R3hab is a powerhouse powerhouse within the electronic dance music DJ, and one of the rare artists who have penetrated quickly and gained notoriety in an expanding Chinese market across 13 shows in 2017, drawing in millions of fans. R3hab has dished out a barrage of top singles which include "Stronger," "How We Party," "Karate," "Won't Stop Rocking," "Samurai," "Revolution," "Flashlight" and "Lullaby." He also has collaborated with top-tier DJs such as Eva Simons, Sander van Doorn, Mike Williams, Calvin Harris, Deorro, Steve Aoki and Afrojack.

Before they let the beat drop, catch the opportunity to score tickets! Just click the 'buy tickets' button on this website — right here, right now!