With one of the most instantly recognizable sounds in EDM, Four Tet is a master craftsman of electronica and a joy to see live! Coming to Hollywood Palladium on Wednesday 28th October 2020 for the second night in a row, the British artist will be playing a set that spans his impressive 10-album career, aided by the visual design effects of UK-based collective Squidsoup! The combination of Four Tet's sonic wizardry with a stunning and innovative immersive light show is something to behold, and is something fans will never forget! Tickets available now for this exclusive event! 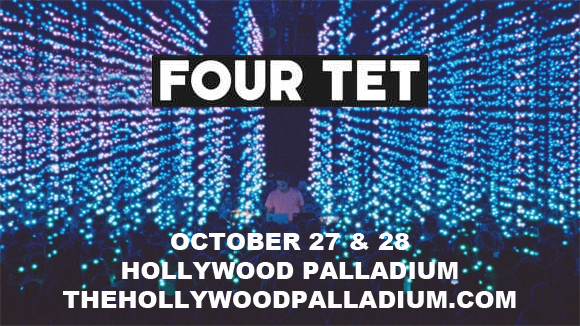 English DJ, producer and musician Four Tet began his career in 1995 as part of the UK post-rock band Fridge. His first solo release came two years later, and in 1998 he released his first music under the moniker Four Tet – the 36 minute, 25 second single "Thirtysixtwentyfive". To date, he has released 10 studio albums, and has become known for his remixes, having remixed a wide variety of artists including Aphex Twin, Bicep, Explosions in the Sky, Super Furry Animals, Radiohead, Ellie Goulding, J Dilla, Lana Del Rey, Manic Street Preachers, Sia, Black Sabbath and Madvillain. He has also collaborated with several artists, including Burial and Thom Yorke.