Swedish electro-pop band Little Dragon comes to Hollywood Palladium on Saturday 9th May 2020 on a brand new tour! The group, who were Grammy-nominated with 2014's Nabuma Rubberband, will be performing a set of hot new material including recent single "Tongue Kissing"! There's no guarantee that a new album is in the mix, but the four-piece, who have collaborated with the likes of Little Simz, Flying Lotus, and De La Soul over the years, like to keep fans on their toes! 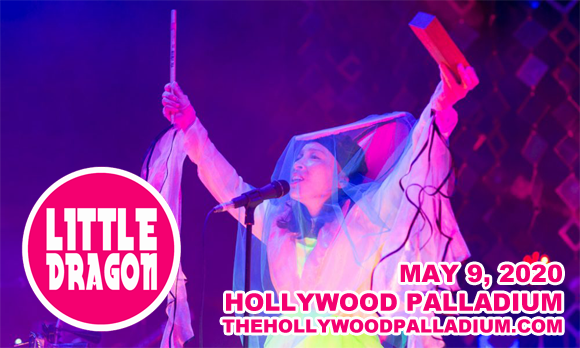 Swedish electronic music group Little Dragon formed in Gothenburg, Sweden in 1996. Yukimi Nagano (vocals, percussion), Erik Bodin (drums) and Fredrik Wallin (bass) all met when they were at high school together, and continued to perform and record together over the years, with Håkan Wirenstrand (keyboards) joining after. The band made its debut in 2006 with a double A-side seven-inch vinyl single "Twice"/"Test". Their eponymous debut album was released the following year, but it was their third studio album, Ritual Union (2011), that served as their breakthrough, reaching number four on the US Dance Chart and number 22 on the UK Albums Chart. The band's fifth and most recent studio album, Season High, was released in 2017.