Machine Head are celebrating the 25th anniversary of release of their game-changing debut album Burn My Eyes, and they're headed to Hollywood Palladium on Friday 20th December 2019 to mark the occasion! The band will play the album in its entirety in this full-throttle show, as well as a wealth of classic Machine Head hits!

“Having started rehearsals with Chris and Logan several weeks ago, I’m literally giddy with excitement at the prospect of how much fun this is going to be. Both Logan and Chris are in phenomenal playing shape, the vibe between all four of us has been incredibly positive!” says founder Robb Flynn. 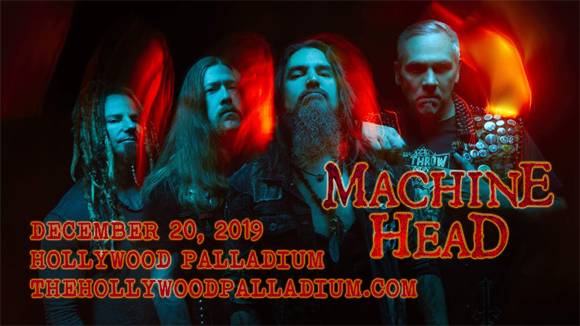 Based in Oakland, California, American heavy metal band Machine Head was formed in 1991 by vocalist/guitarist Robb Flynn and bassist Adam Duce. Drawing influence from the thrash metal of the 1980s, the group's aggressive sound made them pioneers of the  new wave of American heavy metal of the 1990s. The group's debut album, Burn My Eyes, was released in 1994 and their first four albums brought them success throughout Europe. Their 2007 album, The Blackening, brought the band recognition in the US and was picked by Metal Hammer as Album of the Decade in 2010. To date, the band has released nine studio albums, with four of them gaining platinum certification in the UK. Their most album is 2018's Catharsis.