Punk rockers rejoice as Simple Plan & State Champs team up for a fall co-headlining tour, guanteed to give your pumpkin spice a bit of kick! The tour will be touching down at Hollywood Palladium on Friday 22nd November 2019 and sees Simple Plan celebrating 15 years together and the release of their long-awaited sixth studio album, and State Champs performing from last year's hit album Living Proof! They'll be joined by special guest support act We The Kings! 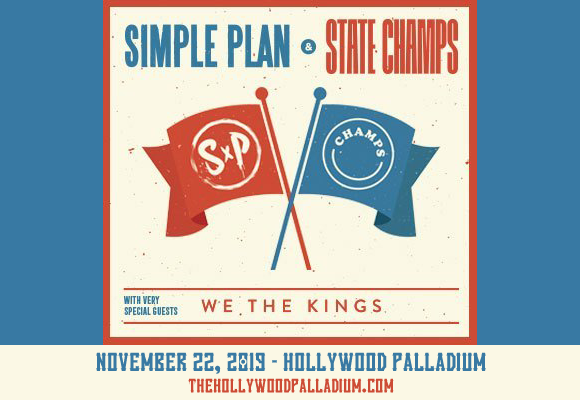 Canadian pop punk five-piece Simple Plan formed in Montreal, Quebec in 1999. The group made its debut in 2002 with the album No Pads, No Helmets…Just Balls, which launched the singles "I'm Just a Kid", "I'd Do Anything", "Addicted", and "Perfect" and featured guest appearances from Mark Hoppus of Blink-182 and Joel Madden of Good Charlotte. To date, the band has released five studio albums, two live albums and one EP. Their sixth studio album, a follow-up to 2016's Taking One for the Team, is slated for release this year.