Listen up, VomitSquad! Snails is bringing his bone-crushing, ear-splitting dubstep to Hollywood Palladium on Saturday 16th November 2019 on the World of Slime Tour! This year's tour will bring you even more bass in your face with The Shell 2.0 holographic stage with new visuals and, of course, over 150k watts of PK Sound! He'll also be bringing dubstep rudeboy Rusko along with him, as well as support from Al Ross, Hi I'm Ghost and Jayceeo! Slimy AF! 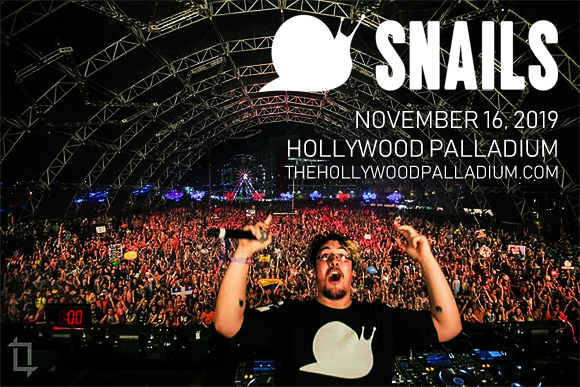 Quebecois dubstep DJ and music producer Snails began his career in 2012, when he released his debut single, "Bubble Gun", through Canadian label Kannibalen Records. Over the next few years, he gained notoriety on the EDM scene through collaborations with Flux Pavilion and Jack Ü, and was championed by several notable names including Skrillex. The following year, he reached a wider audience when he performed at EDC Las Vegas, Ultra Music Festival and Electric Forest. 2016 saw Snails supporting Flosstradamus on the North American Enter Slugz City Tour, and he played festival sets at Coachella, Lollapalooza and Ultra Music Festival. He also performed tour stops in China, Japan and Taiwan, before ending 2016 on tour in Australia with Jauz and Slushii with the Touch Bass traveling festival. In 2018, Snails released his debut digital album, Slimeageddon, which launched the singles "Snailephant" (with Wooli) and "Follow Me" (with Adventure Club featuring Sara Diamond).