Indie pop-rockers Two Door Cinema Club are back to hit the stage on a tour in support of their upcoming happiness-induced new record "Keep On Smiling". The band is set to remind people that there's still a 'wonderful life' ahead in their new single that gives a tease of their new album. Catch them bring this exciting new era to life live on stage at Hollywood Palladium on Tuesday, November 15th, 2022. Taking the indie-pop scene by storm with their hit singles "Undercover Martyn", "Sun", and "Something Good Can Work", Two Door Cinema Club is taking fans on a ride full of smiles aboard the 'Keep On Smiling' era. Don't miss out on their biggest hits and fresh new songs to be performed live on stage at Hollywood Palladium by booking those tickets now! 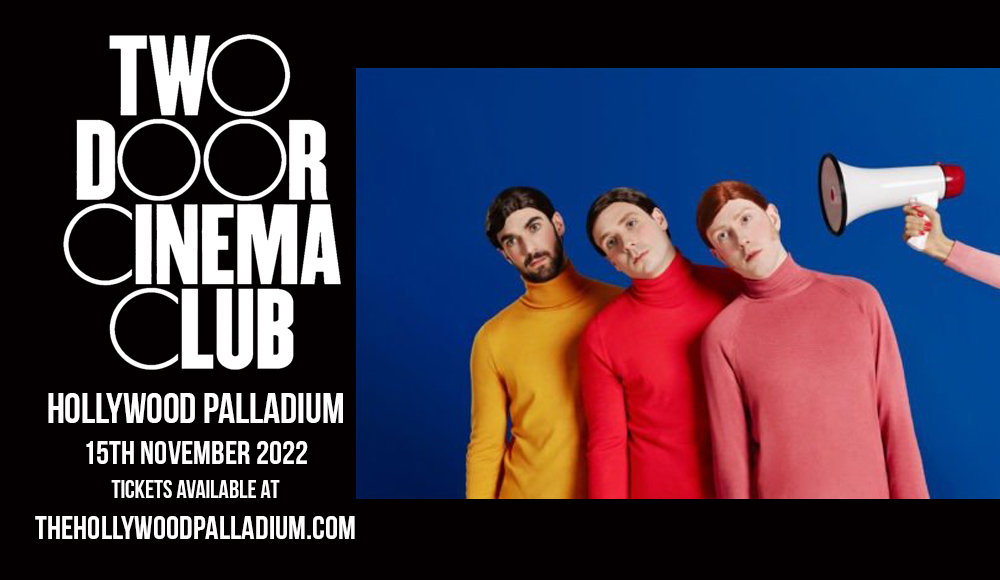 Indie icons Two Door Cinema Club just shared the first track off their much-awaited upcoming album "Keep On Smiling". The track named "Wonderful Life" sets the tone of what fans can expect to hear when the new album comes out this September 2nd.

"Yeah, we’re obviously really excited to be back to releasing music, playing music together on a stage," bassist Kevin Baird said. "I think it just feels crazy. It feels like the music industry was this big complex machine that had never been turned off before and now it’s really stuttering back into life."

From their debut release "Tourist History" dating back to 2010 and its singles "Something Good Can Work", "I Can Talk", and "Undercover Martyn" that brought the band to indie domination, Two Door Cinema Club has defined infectious indie pop-rock goodness over the last decade. Their other notable hits and fan favorites include "What You Know", "Sleep Alone", "Sun", "Changing of the Seasons", and "Talk".

With their fourth studio record "Keep On Smiling" right around the corner, the new album is described as "a nod back to the pure rush of Two Door Cinema Club’s early output."

Fans can expect infectious indie fun with Two Door Cinema Club's exciting new release. With a bright new era shining brighter than ever as the band inches closer to the album's September release, you can expect big surprises over the next few months before Keep On Smiling drops. In the meantime, you just have to make sure you save yourself a seat to smile your way to Hollywood Palladium on November 15th to witness what this new decade and era has in store for Two Door Cinema Club. So, fret no more, start smiling, and grab those tickets now!