Put your hands together for the might Two Door Cinema Club as they bring their live music to Hollywood Palladium on Wednesday 6th November 2019! With their ever growing North American fan base, people far and wide can't wait for Two Door Cinema Club to hit the stage! If you love their music then be sure to grab tickets for you and your friends while they are still available to buy! As they return for a mind blowing tour, make sure you are there! Click the buy now button today! 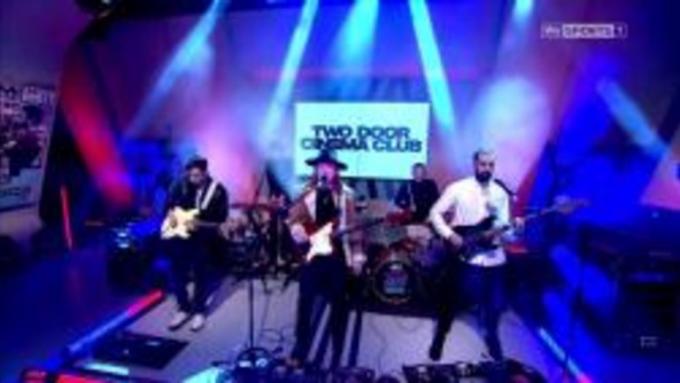 The indie rockers are back on the road for 2019!! That's right – Two Door Cinema Club will be heading to North America this fall!
The band started off their career back in 2007 with the incredible members: Alex Trimble (vocals, rhythm guitar, beats, synths), Sam Halliday (lead guitar, backing vocals), and Kevin Baird (bass, synths, backing vocals). With their debut album they took the world by storm and 2010 was a huge year for Two Door Cinema Club.

With the help and assistance from their French independent record label Kitsuné Music, Two Door Cinema Club were able to release their first record and it hit the United States, following this they made a sign to Glassnote Records in the US, the record transformed their career and gave them a great platform for their next few years in music. Following their triumphant release, they gained the Choice Music Prize for Irish Album of the Year (2010) the following year!

Since then, Two Door Cinema Club have churned out records to keep their fan base well and truly interested and captured for their every move and in 2012 they were more than ready to bring another album to the world. Beacon came out on 3 September 2012, and hit the big time, reaching number one on the Irish Albums Charts as well as getting to the number two spot in the UK Albums Chart.

Next TDCC came back in 2016 with their third studio album to date and Gameshow followed in the same footsteps! With their first single, "Are We Ready? (Wreck)" they once again gained new followers and groundbreaking success as it was debuted on Annie Mac's Hottest Record on BBC Radio 1. Two more singles, 'Bad Decisions' and the title track 'Gameshow' were also included on the must-listen to list for the year!

Get yourselves ready as Two Door Cinema Club travel across the US for an outstanding tour this coming fall season! There's no better place to be than right in the crowd!