Bridging the gap between alternative rock, alternative country, folk, psychedelia and jam band-style soundscapes, Wilco have carved out their own unique path through the music scene over the past 25 years, creating a sound uniquely their own… Now, the Chicago band comes to Hollywood Palladium on Saturday 23rd October 2021 in support of their 11th studio album, Ode to Joy (2018)! Their first outing on the road in two years, the band will be pulling out all the stops to give fans one hell of a show! 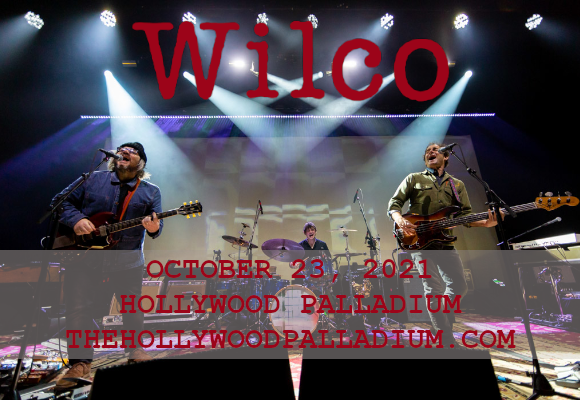 After Chicago-based alt-country band Uncle Tupelo disbanded in 1994, Wilco was born. Currently, singer Jeff Tweedy and bassist John Stirratt are the group's only remaining founding members, but the alt-rock band has had the consistent line-up of Tweedy, Stirrat, guitarist Nels Cline, multi-instrumentalist Pat Sansone, keyboard player Mikael Jorgensen, and drummer Glenn Kotche since 2004. Over the 25 years Wilco has been recording and performing, the group has released 11 studio albums, including the two-time Grammy Award-winning album A Ghost is Born (2004). Ode to Joy, the band's most recent album, was released in October 2019, and reached number one on the Billboard Folk Albums and Independent Albums charts, as well as number two on the Top Rock Albums Chart and number 21 on the Billboard 200.