Pop punk stalwarts Sum 41 are back with their seventh studio album, Order In Decline, and they're headed to Hollywood Palladium on Thursday 17th October 2019 to rock the house! Deryck Whibley and co are known for their incredible live performances and they're bringing a mighty support line-up too, with The Amity Affliction and The Plot In You joining them on the road – a punk rocker's dream! Here's what the media have been saying about Order In Decline:

"One of the most accomplished albums in their catalog" – AllMusic

"A darkly personal view of the world [and] their heaviest album to date." – Kerrang! 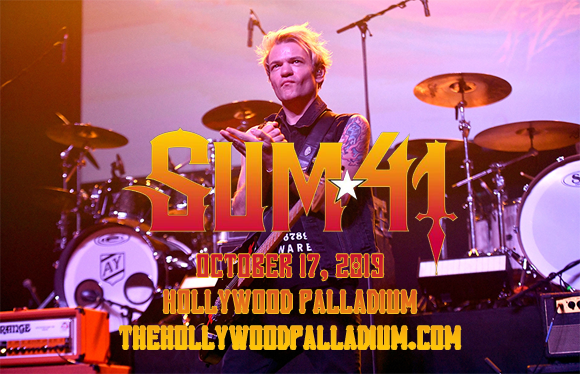 Canadian pop punk band Sum 41 formed in 1996 under the name Kaspir. Currently consisting of lead vocalist, guitarist and keyboardist Deryck Whibley, guitarist and backing vocalist Dave Baksh, guitarist, keyboardist and backing vocalist Tom Thacker, bassist and backing vocalist Jason "Cone" McCaslin, and drummer Frank Zummo, the group found international acclaim with its 2001 debut album, All Killer, No Filler. The album was certified platinum in the United States, Canada and the United Kingdom and launched the smash hit singles "Fat Lip", "In Too Deep" and "Motivation". The band's next three albums were similarly successful, both critically and commercially, and 2007's Underclass Hero became their highest-charting album to date. This year, the group released its critically acclaimed seventh studio album, Order in Decline.