Punk is not dead. And with these bands around, it's alive and kicking! Bad Religion & Alkaline Trio dropped the bomb on their 2020 co-headlining tour of North America. And yes, they're headed to this direction all the way up the stage of the Hollywood Palladium on Thursday 26th March 2020. Revelry is truly in order as Bad Religion is also marking its 40th anniversary in 2020. Do you smell that? It's the smell of sizzling hot tickets in the air! And rabid fans are grabbing 'em like crazy. Now get those fingers busy. Click on the 'buy tickets' link on this website to book your tickets now! 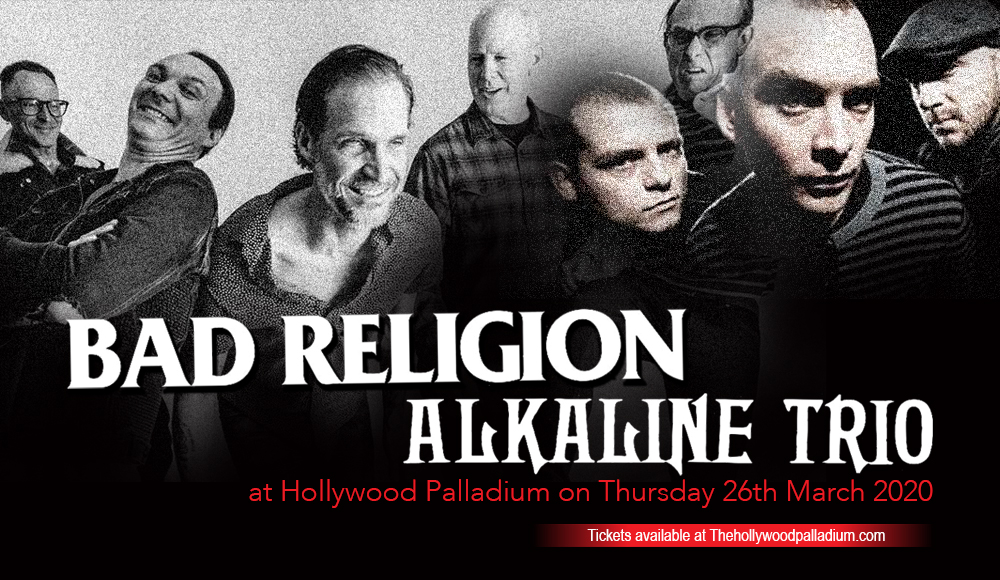 They've been sticking it to the man for 40 years now. Bad Religion got together in 1980 as young punks who injected their punk rock, skate punk and melodic hardcore sound with a philosophically critical world view on politics, religion, science, world history, and enlightenment. And to this day, forty years on, they stand relevant and has forged on with their stance on their most recent album release "Age of Reason". “The band has always stood for enlightenment values,” co-songwriter and guitarist Brett Gurewitz explains. “Today, these values of truth, freedom, equality, tolerance, and science are in real danger. This record is our response.”

Bad Religion has seventeen studio albums to their name, two live albums, three compilation albums, three EPs, and two live DVDs. Having sold over five million albums worldwide.They are considered to be one of the best-selling punk rock acts of all time. Some of their highly acclaimed and chart-topping albums include “Recipe For Hate” and “Stranger Than Fiction”.

As Bad Religion was up in the air with their massive success, someone was watching and considered them as heroes. “Bad Religion was one of my first loves,” says Alkaline Trio frontman Matt Skiba. “I remember exactly where I was the first time I heard Suffer around age 12. They are one of the very reasons I started playing punk rock music and continue to today. This tour is going to be epic on many levels. We’ve done Warped Tour and Festival shows many times over the years but this will be the first time it’s just us and I couldn’t be more thrilled!”

“This tour is extra special,” adds Bad Religion singer Greg Graffin. “Not only are we celebrating our 40th anniversary, but we get to do it with Alkaline Trio, who are such a great band, really excited about this!”

Two epic punk bands going head-to-head in one stage. It couldn't get any better than this. Now go ahead punk, buy your tickets now!