Don Toliver comes to Hollywood Palladium on Saturday 30th October 2021 on the Life of a Don Tour! The rising star is bringing the hype for his brand new album, L.O.A.D., which has been in the mix for a while and is getting fans pumped! In just a short time, Toliver has proven himself as one to watch in the rap game and people are thirsty for his new material, which he'll be performing live for the first time! 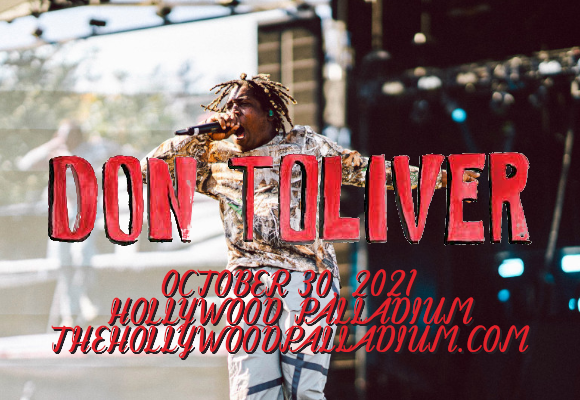 Don Toliver is a rapper, singer, and songwriter who made his debut in 2017 with the collaborative mixtape Playa Familia with Yungjosh93. Toliver was signed to Atlantic the following year and released his major label debut mixtape, Donny Womack that August. Over the next couple of years, he collaborated with several well-known artists, including Travis Scott, Wiz Khalifa, Quavo and Offset from Migos, and Eminem. He released his debut studio album, Heaven or Hell, in 2020 on Cactus Jack, Travis Scott’s imprint label. The album hit number five on Billboard’s Top R&B/Hip-Hop Albums chart and number seven on the Billboard 200. The rest of 2020 brought more features for Toliver, including on Internet Money’s track "Lemonade," alongside Gunna and Nav, which reached number six on the Billboard Hot 100.