Are you ready for the band they’re calling the new Led Zeppelin? That’s right – Greta Van Fleet are on tour this year, headed to the Hollywood Palladium on Sunday 6th October 2019!! The March of the Peaceful Army Tour, featuring special guests Shannon and The Clams, is coming to your closest major venue – so don’t miss out on your chance to see the show!! Grab your tickets today!! 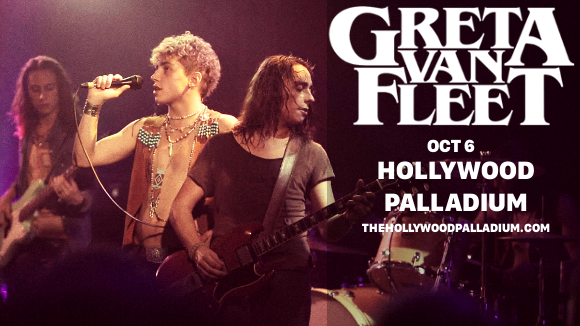 Comprised of brothers Josh, Jake, and Sam Kiszka and Danny Wagner, this young band have been bringing back the classic 70s rock sound the an audience hungering for that sound. Greta Van Fleet are now on tour with their debut full-length album, “Anthem of the Peaceful Army,” which hit the top of the Billboard Rock Album charts within the first 7 days of its release and contained the single "When the Curtain Falls”, which became their 3rd to hit the top of the Billboard Mainstream Rock charts.

"We were talking, and I think we all decided earlier this month that we need to do a record as soon as possible,” enthused bassist Sam Kiska, when asked if there was any new music in the works “So the one thing I can say right now is that you can definitely expect album two in 2019…We're gonna make the music that we want to hear, and we're going to grow musically.”

Looks like there might be some surprises at this show!! Don’t miss out on your chance to experience them – have you got your tickets yet??