The rising star rapper who's got a melodic way with words you just gotta love, Lil Tecca, is back to finally spit his bars live on stage at the Hollywood Palladium on Tuesday, 15th March, 2022 where he'll be stopping by for his Tecca Loves You Tour. The rapper just recently dropped his second studio album that hit #10 on the charts, "We Love You Tecca 2", where he indeed brought in the love with his signature infectious melodies, striking lyrics, and lit beats. Tecca rose to the limelight with his breakout hit "Ransom". Jam and vibe to his new tracks and fan-favorites such as "Dolly", "Somebody", "Did It Again", "Repeat It", and "Ransom". Watch him spit his bars and strike through melodic lyrics and beats live on stage. Book your tickets now! 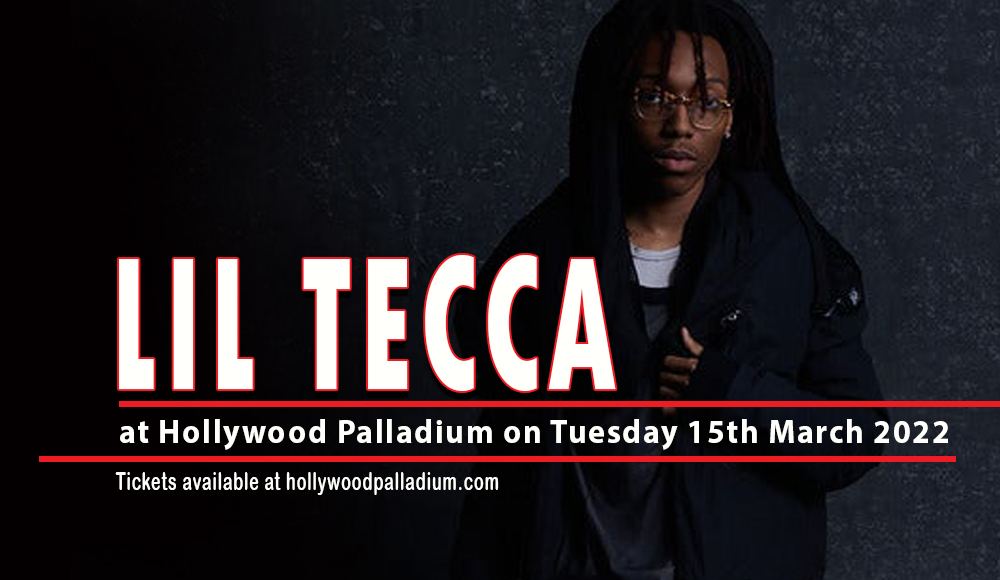 Born as Tyler-Justin Anthony Sharpe, Lil Tecca has his roots in New York, raised by his Jamaican parents. First aspiring to become an NBA player, Tecca found himself later on wanting to pursue music.

Kicked off by rapping freestyle diss tracks with friends over Xbox, he then propelled to take music seriously and started posting tracks on Soundcloud. "Tectri" with his friend, Lil Gummybear, was his first track that garnered some attention. His early trappy tracks such as "My Time" also gained him streams and attracted listeners. By 2019, he dropped "Ransom", his multi-platinum breakout hit single that peaked at #4 on the Hot 100. At this time, his first mixtape "We Love You Tecca" also hit #4 on the Hot 200 charts.

Dropped in the middle of the pandemic, his first studio album, "Virgo World" hit #10 on the Billboard 200, with notable tracks "Dolly" and "When You Down" entering the Hot 100.

Moving forward, the rapper recently released his second record, "We Love You Tecca 2". "This one feels way more like I have guidance, and just a direction… It definitely feels way better" says Lil Tecca in an interview with GQ, as he talks about how he felt with his new record compared to when he dropped his first album.

Lil Tecca is back, better, and stronger than ever. The star is confident, ready to meet and take his fans on a lit night to vibe and jam to his bars, melodies, and sick beats. It's a new chapter for the singer, and for audiences to come back and gather for a night of lit music you gotta love. Book your tickets now!