The Grammy Award-winning "Love$ick" DJ and electronic record producer, Mura Masa, is hitting the stage at Hollywood Palladium on Friday, 28th of October 2022. Kickstarting the hype by lighting up stages across the world with live electronic bops, the record producer recently announced a new upcoming album named "Demon Time" scheduled for release this September. Sharing the new record's lead single "Blessing Me", the man is set to celebrate his new music live on stage with a series of shows later this year. Get ready to jump to the beat at Mura Masa's live show by booking your tickets now! 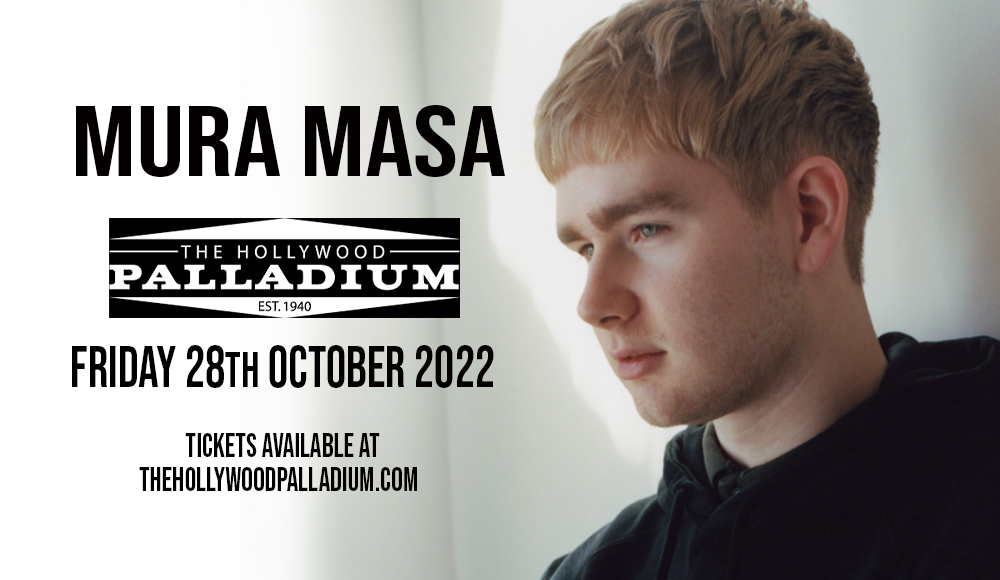 Alexander Crossa, or Mura Masa as the world came to know, started self-producing tracks at the age of 15 by "searching for samples on YouTube and other corners of the internet". Diving into the electronic scene after stumbling upon Hudson Mohawke, streaming music on YouTube. After discovering more influences and getting inspired to write his own music and start playing instruments, Crossan started uploading tracks to SoundCloud at the age of 16 with his alias that stuck through – Mura Masa.

From then on, the man started making early waves, attracting a slew of listeners through his electric bops on SoundCloud, later on launching his career through his mixtape "Soundtrack to a Death" distributed to global airwaves by Jakarta Records.

Launching his own label Anchor Point Records in 2015 with a partnership with Polydor Records and Interscope Records, Mura Masa started taking his musical footprint to the next level.

His self-titled ful-length debut album propelled the man to the global stage with his hit single "Love$ick" featuring A$AP Rocky in 2016. He released his follow-up record "R.Y.C." in 2020 which featured his tracks "I Don't Think I Can Do This Again" with Clairo, "Deal wiv It" with slowthai, and "No Hope Generation".

On September 16th of 2022, Mura Masa is scheduled to drop his new third album "Demon Time". The album will feature his new singles "2gether", "Bbycakes" with Lil Uzi Vert and PinkPantheress featuring Shygirl, "Blessing Me" with Pa Salieu and Skillibeng, and "Hollaback Bitch" with Shygirl and Channel Tres.

You can expect a new dynamic record from Mura Masa as "Demon Time" comes out real soon. With a variety of artists in the roster and big surprises in store, don't miss out on Mura Masa's new album coming to life at his live shows by booking your tickets now!