Rod Wave comes to Hollywood Palladium on Tuesday 19th October 2021 as part of the SoulFly Tour, which sees the soulful-voiced singer and rapper performing tracks from his third album, which has given hits like "Tombstone"! The tour marks a levelling up for the artist, with production from hip-hop festival mainstays Rolling Loud, meaning fans can look forward to a full-throttle concert experience! Tickets available now for his most exciting tour yet! 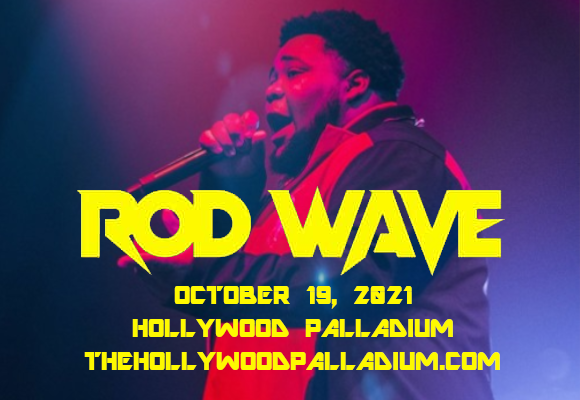 There’s been a steep trajectory to stardom for rapper, singer, and songwriter Rod Wave, who has
made the journey from SoundCloud mixtapes to chart-topping albums in just three short years. With a distinctive and multifaceted voice, the R&B/Trap/Hip-Hop star is equally suited to soulful melodies as he is dominating bars. Combined with his relatable lyrics, Wave’s voice and style brought him viral success on YouTube and Tik Tok with the 2019 single "Heart on Ice" (from his mixtape PTSD), which went on to peak at number 25 on the Billboard Hot 100. Later in 2019, he released his debut album Ghetto Gospel, which peaked at number 10 on the Billboard 200 and was certified gold by the RIAA. A second album, Pray for Love, followed, peaking at number 2 on the Billboard 200 and launching several hits. 12 of the album’s tracks charted on the Billboard Hot 100, including the single "Rags2Riches", which peaked at number 12. SoulFly, his third and most recent album, debuted at number one on the US Billboard 200 in March 2021.