Still at the heels of the launch of their 2014 album "Get Hurt", The Gaslight Anthem are hitting the live concert circuit once again. One of their stops include the Hollywood Palladium on Sunday 28th September 2014. Take note fans, this is a one-night show only. Not worth missing… 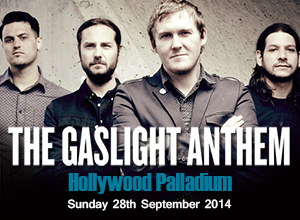 Formed in 2006 in New Brunswick, New Jersey, The Gaslight Anthem released their debut album "Sink Or Swim" in 2007. Their career could be likened to someone stepping on the gas and driving at high speeds along the success superhighway, and picking up a herd of loyal fans along the way.

From New Jersey, their cult-following spread like wildfire, reaching international shores as well.
In August 2008, the eminent Kerrang! Magazine put them on the cover, making history as the first band to appear on the cover, even without a prior story or write-up about them in previous issues. They were hailed as well by Kerrang! as "The best new band you'll hear in 2008". The following year, they also bagged the "Best International Newcomer", from the 2009 Kerrang! Awards.

Garden state rock. New Jersey punk… These are just some of the labels attributed to Gaslight Anthem's burgeoning sound. They're unstoppable, and so are their rabid and hardcore fans who are dying to get tickets. Don't be left behind, get your tickets now!