RESCHEDULED SATURDAY 27th JUNE 2020 – previously 15th March 2020.
Hot stuff on the trap scene and a prolific artist and performer, Trippie Redd comes to Hollywood Palladium on Saturday 27th June 2020 on his Love Me More Tour! The platinum-selling rapper has recently released A Love Letter to You 4, and there's rumors of a third studio album waiting in the wings – a follow-up to his 2019 smash hit album! The 20-year-old Atlanta emcee is clearly going places, so make sure you check him out live as he's blowing up! 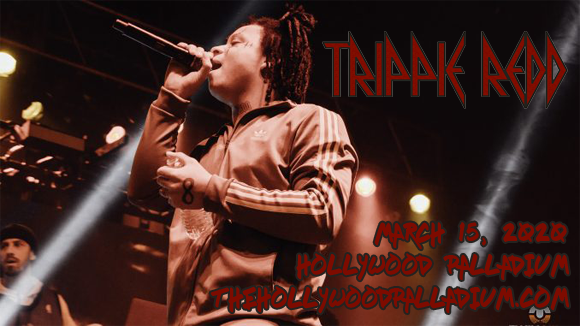 A relatively new face in the trap scene, who's come a long way in just a few years, Trippie Redd's debut mixtape, A Love Letter to You, came in 2017. "Love Scars," the mixtape's lead single, racked up over 8 million views on YouTube and over 13 million on SoundCloud in just a couple of months and before long, Redd had his first hit on the Billboard Hot 100, featuring on XXXTentacion's single "F*** Love". Life's a Trip, his debut album, came in the summer of 2018 and reached number four on the Billboard 200. His second album, ! (2019), did similarly well, debut at number three. A Love Letter to You 4, his latest mixtape, was released in November 2019.